you know how some people are “creative” or have “great intuition”, and others appear NOT to have those qualities?

Creativity and Intuition are ‘skills’ anyone can develop!

The recipe is simple:

look at the same problem long and hard enough – usually from as many different perspectives and angles, and your mind will suddenly and ‘unexpectedly’ come up with solutions that make no ‘logical’ sense. Aka: creativity and intuition.

Speaking from personal experience, I am extremely creative in some areas, and not creative at all in others.

And those where I am, guess what: it’s the stuff where I spend ages, sometimes months, sometimes ‘lifelong learning’ revisiting the same thing over and over again.

… however: Really, there’s nothing genius going on, just persistence.

Look at this picture: 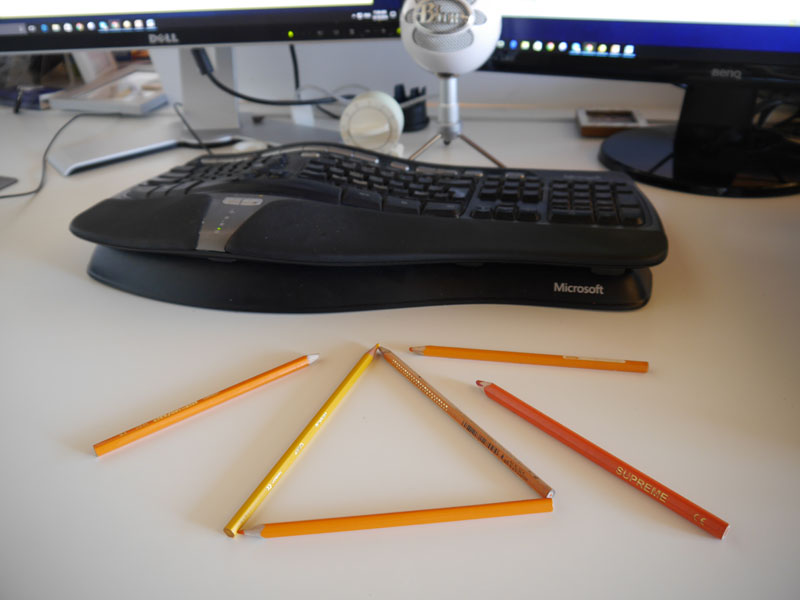 6 pencils. Your mission, should you choose to accept it, is to arrange 6 pencils into 4 equal triangles. (yeah, yeah, I know, they’re not *exactly* the same length, just pretend they are – I borrowed them from my daughters)

The rules are simple:

6 pencils. Only the ends can touch. Meaning: no ‘crossing’. You must create 4 equal triangles.

(don’t ruin the fun by reading the comments, they give away the solution)

Most likely it’s hard for you. (it took me a good 5mins to figure it out … but then, my 10 year old daughter took only a fraction longer, so either she’s a genius, or it’s not that hard;-)

Statistically speaking (I’ve tried it with quite a few people), you’ll give up. (**)

And that’s precisely where you starve future ‘creativity’ and ‘intuition’.

Btw, when you figure it out (yes, it is possible!) it is immensely satisfying – and IMO it’s so satisfying precisely BECAUSE it’s a creative moment, and you only got there because you stuck with it!

PS: (**) boo, bad Veit: now I’ve put the thought of ‘giving up’ in your head, and because statistically speaking most people give up, well, social psychology tells us your brain is going to tell you that it’s ok to give up. Well, most people in this world are mere statistics, give up far too early, and spend their lives admiring the bright shining stars. Don’t be a statistic! Figure out that darn 6-sticks-4-triangles thing yourself!