Ok, at the risk of making some powerful enemies, I’d say 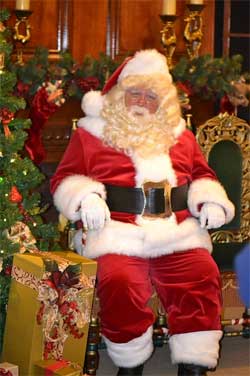 Of more value to most people.

EVS is the successor of easy video player (EVP).

EVP is a great tool because it takes all the ‘techy’ bits out of putting videos online.

So, in EVS their aim was to take the ‘techy’ bits out of the video production.

Meaning: you can put videos that make you money online very quickly, rather than having to fiddle with lots of different programs.
Unfortunately, the end-result is a beast that – from an evolutionary standpoint – resides somewhere between fish and fowl: (note, these comments are based on what I can see here: http://easyvideosuite.com/partners/the-product/, I haven’t bought EVS myself!)

But, even if these weren’t any issues for you, here’s why I continue to put my money on Santa:

The real secret to making highly converting (and hence monetizable) videos is this:

You need to have a compelling message that resonates with (and provides value for) your target audience.

In practice even more than e.g. writing a ‘normal’ sales-letter.

See, a ‘normal’ sales-letter can be (and is in practice) read in many different ways:

some people read it word by word, other look at just the bullet points (and then may decide to read it all once they’re ‘hooked’), others yet jump to the bottom and then read upwards (once they’ve seen the price;-)

With a video sales-letter on the other hand, you have only one way of consuming it … and that’s linear.

Meaning: your message has to be so compelling that you keep all those different ‘reader types’ engaged all the way through.

And that’s much harder to do, and requires a lot more effort than composing a ‘normal’ sales-letter.

The bulk of the work creating videos that sell is NOT in the few clicks for screen-capturing and uploading, but instead in, well, you guessed it: the boring, tedious fundamental work that no one wants to tell you about, because you’d be so turned off that you’d never buy their push-button, time-saving Easy-everything.

Well, I say: let the masses create ‘mass produced’ videos that’ll continue to create no sales, whilst we focus on what matters … even if it takes a few more clicks of the mouse.

PS: obviously, the above comments don’t apply if all you’re doing is create lots of little screen-capture style tutorials that don’t need any further processing. In that case EVS may well save you some time. My comments are based on the assumption that you’d like to sell stuff.